Back in October 2016 I had an enquiry land in my inbox from the lovely Valentina and 10 months later I was on my way to The Sheraton, Park Lane to look after this special lady and her lovely mother, Jacqueline, for the big day!

I have been fortunate enough to work with these two lovelies since for other occasions but today I want to re-live the wonderful wedding day morning that I had the pleasure of being a part of.

All images were taken by superstar photographer, Paul Toeman, who was on hand to capture all the beautiful moments of the day.

Both Valentina and Jacqueline wanted a fresh, natural and dewy makeup look.  Jacqueline was wearing a beautiful pink dress on the day so we decided to incorporate a pretty pink shade into her eye makeup which looked gorgeous against her skin and golden highlighted hair.

Her base consisted of light products as she really didn’t need much coverage at all, and I injected as much dewiness into her complexion as possible with a combination of Bobbi Brown’s Moisture Rich foundation and MAC Cosmetics’ Face and Body foundation.  The lip shade I used was ‘Cosmo’ by MAC and then a slick of gloss in ‘Fashion Whim’ (also by MAC) was added ontop to mute the tone slightly and make the overall look a little fresher and natural.

Valentina’s base consisted of the same combination as Jaxqueline, again to keep the skin translucent and glowy.  She was adamant that she wanted absolutely no shimmer at all as didn’t want to appear at all shiny on the day so all highlighters were off limits!

I created a smokey brown eye with the Urban Decay Naked Palette using shades ‘chopper’ on the lid, ‘sin’ on the brow bone, and ‘smog’ in the crease line.  I added a brown liquid liner by Estee Lauder to define the eyes and enhance and add a bit of drama but also ensure that they didn’t overpower the overall pretty and natural look.  Valentina wore the lip shade ‘Freckletone’ by MAC Cosmetics.

Hairstyles for both these lovely ladies were kept along the same theme as the makeup – relaxed, fresh and not too stylised.

Valentina opted for beach waves created with a conical wand and also featuring a pretty braid running along one side.

Jaqueline’s hair was styled with GHDs in a soft waves and arranged into a half up, half down style.

A huge congratulations to Valentina and Adam on moving into their dream home this year and I look forward to seeing you again soon!  Big thanks again for having me look after you on your wedding day Valentina, it was a total pleasure and I can’t wait to work with you and your mum again for the next occasion! 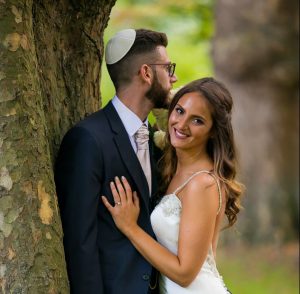 This website uses cookies to improve your experience while you navigate through the website. Out of these, the cookies that are categorized as necessary are stored on your browser as they are essential for the working of basic functionalities of the website. We also use third-party cookies that help us analyze and understand how you use this website. These cookies will be stored in your browser only with your consent. You also have the option to opt-out of these cookies. But opting out of some of these cookies may affect your browsing experience.
Necessary Always Enabled
Necessary cookies are absolutely essential for the website to function properly. These cookies ensure basic functionalities and security features of the website, anonymously.
Functional
Functional cookies help to perform certain functionalities like sharing the content of the website on social media platforms, collect feedbacks, and other third-party features.
Performance
Performance cookies are used to understand and analyze the key performance indexes of the website which helps in delivering a better user experience for the visitors.
Analytics
Analytical cookies are used to understand how visitors interact with the website. These cookies help provide information on metrics the number of visitors, bounce rate, traffic source, etc.
Advertisement
Advertisement cookies are used to provide visitors with relevant ads and marketing campaigns. These cookies track visitors across websites and collect information to provide customized ads.
Others
Other uncategorized cookies are those that are being analyzed and have not been classified into a category as yet.
SAVE & ACCEPT
Menu
Instagram Youtube Facebook